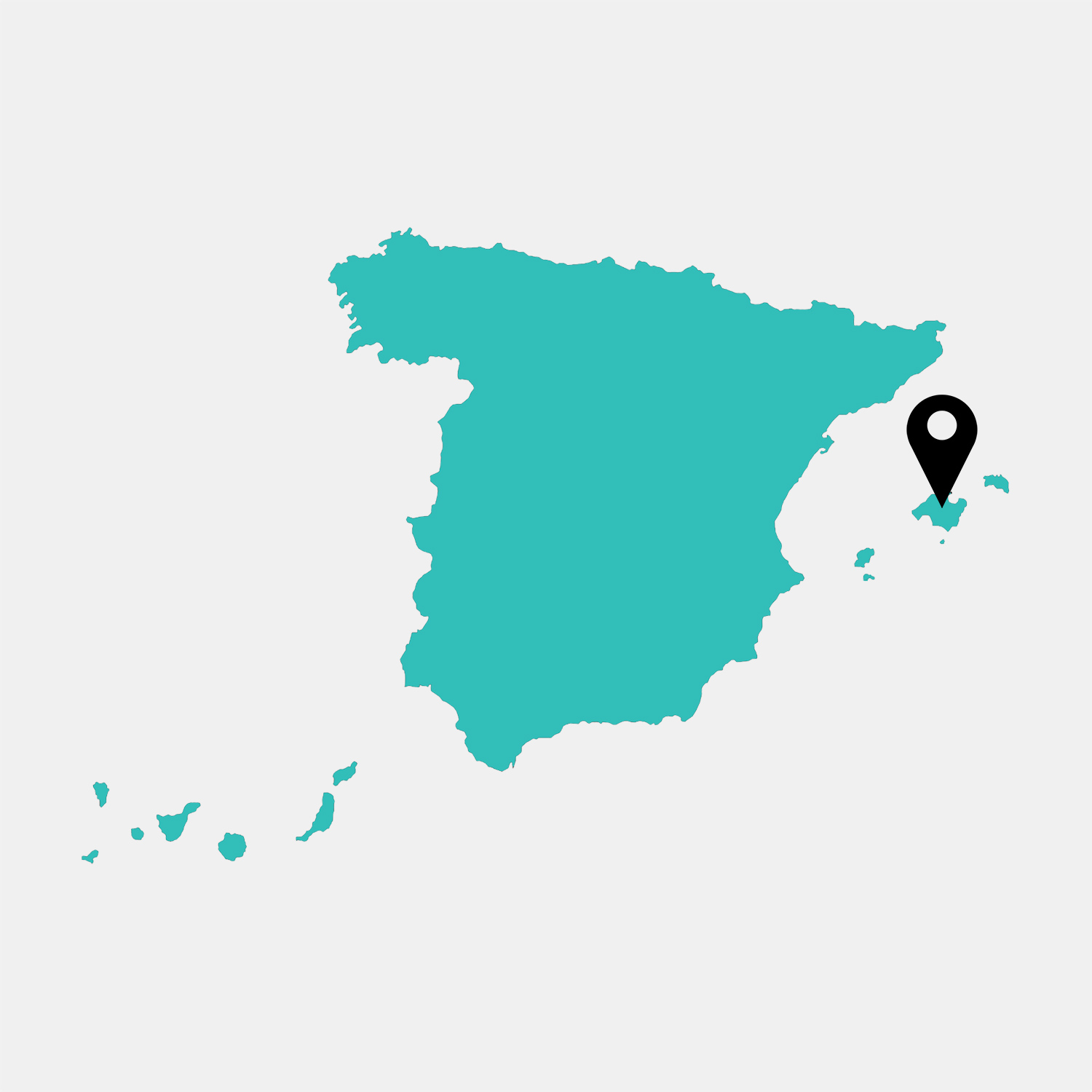 There is something about the terrain that breathes the spirit of a place. Here we were, standing on the side of a road that cuts through the Tramuntana Mountains of Majorca — a drive dotted with jagged switchbacks, roadside gullies, and precipitous drops. Valldemossa, an intimate city poised on the edges of a magnificent terraced hillside, lay before us. Even in the harshest light of day, it was breathtaking. Indeed, as the week continued, it would be the terrain that dictated the lifeblood of each place we visited, shaping our experiences and memories.

We rolled on along the northern ridge of Majorca toward the town of Deia, trees to our left and dry, dusty hillsides to our right. As we approached the city, the trees cleared to reveal an endless blue vista. Once again, we hastily stopped our car and scrambled to the guardrail. It seemed as if we were staring at the edge of the world. The ocean, crisp and blue, stretched out before us, flecked with white sailboats and disturbed only by the elegant, cutting wake of the motorboats that ambled by. We followed the sailboats that grew smaller and smaller until they became specks on the horizon, smearing together like paint on a canvas against the magnificent blue backdrop. Realising we were by then looking at the sky — the two blue bodies colliding seamlessly — we had to smile.

Shortly we arrived in Deia: flanked by mountains and the vast Mediterranean Sea, and renowned as the chosen residence of many writers and artists. Small houses and steep narrow roads rose on one side of the valley, mirrored on the other by the Hotel Belmond La Residencia. Layered carefully up the hillside, La Residencia welcomed us with an immaculately-kept cobblestone driveway. A manor conversion, La Residencia is the perfect marriage of tranquil, romantic luxury and the careful preservation of an authentic cultural setting. Though frequented by celebrities and offering the utmost in comfort and relaxation, La Residencia truly accentuates and appreciates the surrounding area and the history of Mallorca, finding ways to weave these into every aspect of the hotel.

The front of the property boasts a gorgeous garden bursting with flowers, interlaced with citrus trees, basil, and other local herbs that the hotel uses in their four restaurants and lounges. The spa provides a variety of services, including massages, skin treatments, and body sculpting. These services, too, integrate the true spirit of the island, using the citrus fruits from the property in their various oils, as well as local salts in the luxury treatments.

The hotel retains a resident artist and sculptor, both offering master classes to guests and visitors. A gallery bordering both studios showcases paintings from local artists, holding showings that pave the way for new talent to emerge from neighbouring towns. As of the time of our visit, a Joan Miró-inspired installation was in the works, a humorous complement to the hotel’s delicious Café Miró restaurant.

The stone floors and beamed ceilings throughout the interior reflect the personality of the original Mallorcan manor house. Each room, from those in the original house to the new suites built in 2007, has been carefully designed with modern conveniences while still featuring traditional Mallorcan furniture and wooden ceiling rafters.

We were shown to our room, a special gem of the property. Located in a protected tower of the original structure, guests enter through a small courtyard off the main house and ascend a narrow, winding spiral staircase, kept cool by its smooth white stone interior. The suite features a dual-storey layout, with a magnificent terrace allowing spectacular views of Deia, the Tramuntuna Mountains, and the sprawling property behind the villa. As day turned into night, the setting sun lit up the town in all its glory, with the buildings glowing from their terraced perches against the towering mountains.

That evening, we treated ourselves to dinner at the famed El Olivo restaurant, which occupies the building that was previously the Son Moragues olive press, still preserved on the premises. The meal was perhaps the best we had in Mallorca — the standout dish being the baked saddle of lamb, crusted in a local olive salt crust with a rosemary sauce. Complemented by sautéed sole and accompanied by a Mallorcan orange sauce, together with a bottle of red wine, it was the perfect ending to a relaxing and restorative day.

The following day, we set out on La Residencia’s ‘Donkey Trail’ excursion, a journey into the hotel’s olive groves. Led by Luna and Pancho, two of the property’s resident donkeys, guests are treated to a culinary journey into Mallorca’s local cuisine. The hotel’s expert chefs demonstrated the typical preparation of pa amb oli, a delicious combination of rustic bread rubbed with garlic and tomato, garnished with olive oil and Mallorcan salt. Combined with a spread of Spanish ham, Mallorcan cheeses, and local wine, along with some of La Residencia’s own olive oil, it was a truly unique experience that should not be missed.

That afternoon, we set off once again to continue our journey northeast. Within five minutes, we were edging our way downward, out of the mountains and toward the small valley town of Soller. Cut off from the western part of the island until recently, Soller is nestled among citrus groves and is a supplier of olive oil to many nearby towns. The nearby Port de Soller presents visitors with a panoramic view of the vast sea, as well as lungs full of salty, refreshing sea air.

After enjoying an ice-cold glass of local white wine, we were again on the move toward the cliffs bordering the edge of the island, known as Cap de Formentor. As the narrow roads surrounded by sheer rock faces and towering trees wound back into the mountains, the landscape began to resemble a different island entirely — it was akin to the hills of Ireland or Scotland. We passed goats and sheep around hairpin turns rife with avid (and daring) cyclists. The island is a haven for professional cycling teams training for elite races, including Britain’s Team Sky, who perennially compete in high-profile events, including the prestigious Tour de France.

As we approached one of the main lookouts for Cap de Formentor, we decided to take the path less travelled, traversing a sinuous lane 2 kilometres up a winding face to the highest point above the cliffs. This time, it was not the wheels of our car but our feet which felt the terrain of the island. We ran to an abandoned lookout and threw caution to the wind, climbing up an exposed set of two rusted ladders to what ended up being one of the most extraordinary viewpoints on the island.

We were greeted with a 360-degree panorama, with the bay of Alcudia to one side and towering cliffs on the other. As endless rays of sunlight stretched from beneath perfectly placed clouds, it felt truly surreal. Nearly alone on top of a stone tower, watching the light dance across a calm sea, it was hard not to laugh at our good fortune and marvel at nature’s beauty. It was one of the few times that it just felt right to set my camera down and take in the moment, as no picture could truly capture the beauty unfolding in front of us.

We descended from the cliffs and set off inland for Arta, a welcome reprieve from the tourist traps that dot the island’s eastern and western coasts. Arta reflects an enchanting mix of cultures — meshing Spanish, British and German influences — and the town’s winding hills are filled with charming galleries, cafes, restaurants, and boutiques. As we sipped orange juice at a small café while watching the world unfold in front of us, it was in many ways the perfect escape from the party crowds elsewhere — presumably oblivious to the old-world charm a short distance away.

With some trepidation, we prepared to depart our enclave for the massive capital of Palma, armed with a reservation at Hotel Cort. We were handsomely rewarded for our ‘bravery’ when we arrived at a chic, bohemian hotel. Hotel Cort combines tremendous views onto the main square in the heart of old Palma with an edgy vibe that defies expectations. With room service menus boasting, “Whoever came up with this idea of never having to leave your hotel room was a pure genius… like IQ 240 thousand,” and bags of biscotti adorned with, “It would be perfect to have a sandwich, but this will do,” we found ourselves at home in a gorgeous yet playful environment. We had a welcome drink of cava at the hotel’s restaurant in the square’s main plaza and, after deciding we were having too much fun to leave, decided to stay for dinner. Retiring to our room, we chose from the hotel’s spirited ‘pillow menu’ — each option catering to a traveller’s particular taste in comfort — and spent the night in a blissful coma.

As our plane lifted off the following morning, the view of the island in its entirety swept beneath us. Flat lands sprinkled with fincas cast against towering mountains led us to the sea, and ultimately back to reality — but the memory of the salty air pressing against our faces left the experience of Mallorca (and the prospect of a return visit) fresh in our minds.