“I feel like I’m Han Solo, and you’re Chewie…and we’re in that f***ed-up bar.” The line, uttered by ‘Jay’ in the film Dogma, came to mind one night as I was — yet again — failing to understand what the hell was actually going on. Like that legendary bar scene in the original Star Wars, Burning Man is a challenge to define. But here goes…

Words and Photography by Thai Neave 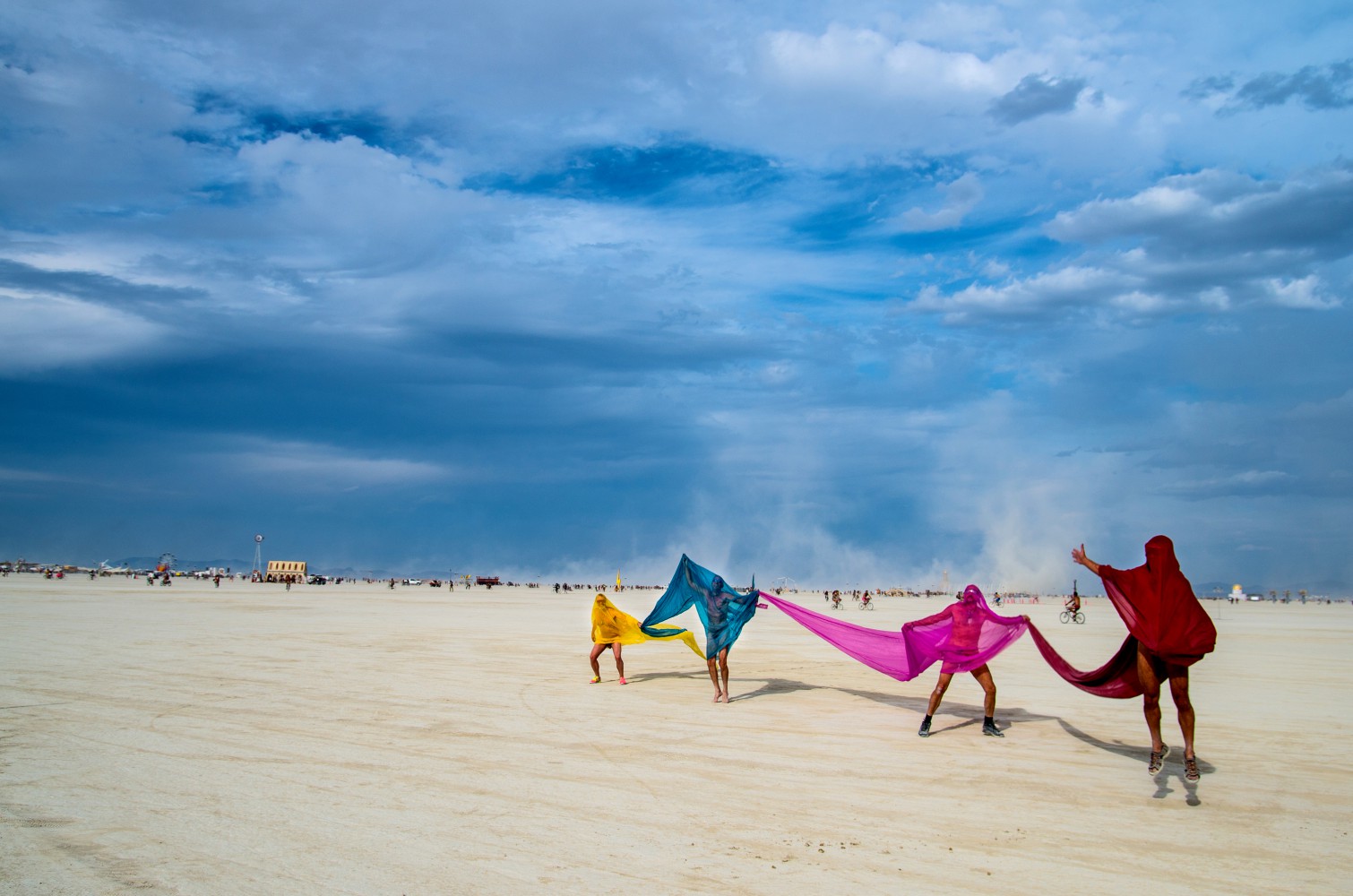 The official event website says that Burning Man is “a temporary metropolis dedicated to community, art, self-expression, and self-reliance. In this crucible of creativity, all are welcome.” That is, of course, for those who can actually get in: the event sells out so quickly that it’s a little like trying to lay hands on one of Willy Wonka’s golden tickets.

Burning Man has grown every year since its humble conception in 1986. Years of social and conventional media blasting spectacular images of the event has intrigued people from all corners of the globe. Now, approximately 70,000 people descend into the middle of the Nevada Desert to form the temporary Black Rock City.

Many argue that the journey is in its own way a modern pilgrimage — so dedicated are many of those that attend the annual event, that the closest they will ever get to organised religion is their proud identity as ‘Burners’. Pilgrimage or not, we waited 12 hours overnight in a 80-kilometre line of RVs and campervans just to reach our makeshift Mecca.

Once inside, everyone sets up camp around a large space of desert left entirely for art and unimaginable debauchery. This space is affectionately referred to as the ‘Playa’. It’s here where spectacular pieces of art are showcased, only to eventually be burnt down. A giant man and a temple are always erected, and the event culminates with their ultimate destruction. Because the art is equally new and impermanent, it gives Burners more reason to keep going back: if they don’t go, they miss out.

Whether it’s one’s first ‘Burn’ or their 20th, participants are instantly smacked with an alternative paradigm: no money is exchanged (except to purchase ice and coffee), and clothing is very optional. The weather is extreme; the music endless. Phones and social media are forgotten, and the focus turns from everyday capitalism to exchanges in creativity, love and generosity. Maybe this isn’t the place for those for whom that sounds too hippy-dippy-woo-woo. But for most that regularly attend, it’s their Utopia.

What struck me this time around was how critical attendees are to creating the overall experience. Sure, the price of admission contributes to the overall infrastructure and art installations, but it is the Burners that ultimately make each event so unique. It is our creativity, our music, our costumes, our workshops, our gifts to each other, and ultimately our attitudes that separate Black Rock City from any other place on earth. We didn’t just go to the event — we were the event. Whether we were conscious of it or not, we came to experience ourselves — one another — vibrating on a higher frequency. As such, we morphed into art admiring itself.

That art extends to costuming. For those that want to actually wear clothes, Burning Man is a bit like Halloween on steroids. What’s interesting is how quickly the wackiness becomes normalcy. It reminded me of a sensation I had in Havana, Cuba, when after a week or so I got so accustomed to the old 1950s cars rumbling by that it no longer felt unusual. Similarly, after just a few days at Burning Man, the sight of a 2 metre tall Canadian getting out of his tent next to mine dressed as a banana felt, well, expected. 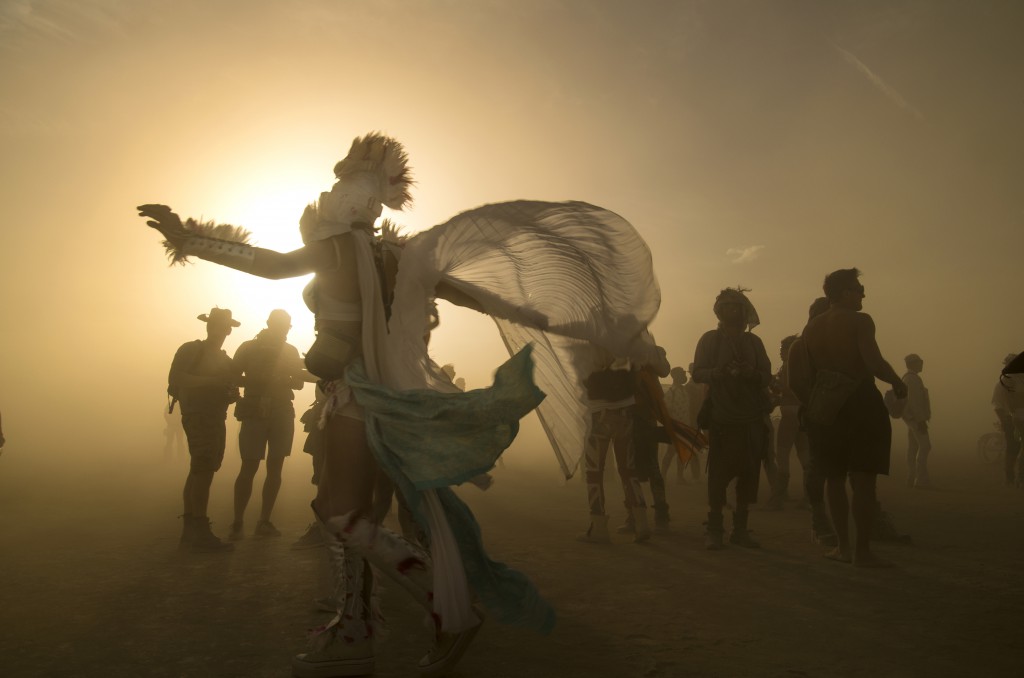 No doubt many Burners’ getups are heavily influenced by the fantastic post-apocalyptic world of Mad Max. Sure, leather and fur are perfect in the harsh weather conditions, but the bonus is that they also look stunning against the desert backdrop. Adding to the desert-chic style are the goggles, masks and bandanas needed to protect against the dust storms that frequently sweep across the Playa with little to no warning. Sometimes, the dust can be so thick that it’s literally impossible to see more than a body length ahead.

Most Burners use bicycles to get around, which means at night, it’s advised to incorporate lights into one’s costume, simply for safety. So when the sun sinks, the greatest light show on earth erupts as the Playa becomes a giant soup of red, pink, blue and green neon whirling around in every conceivable direction. That scene in itself is worth the price of admission. 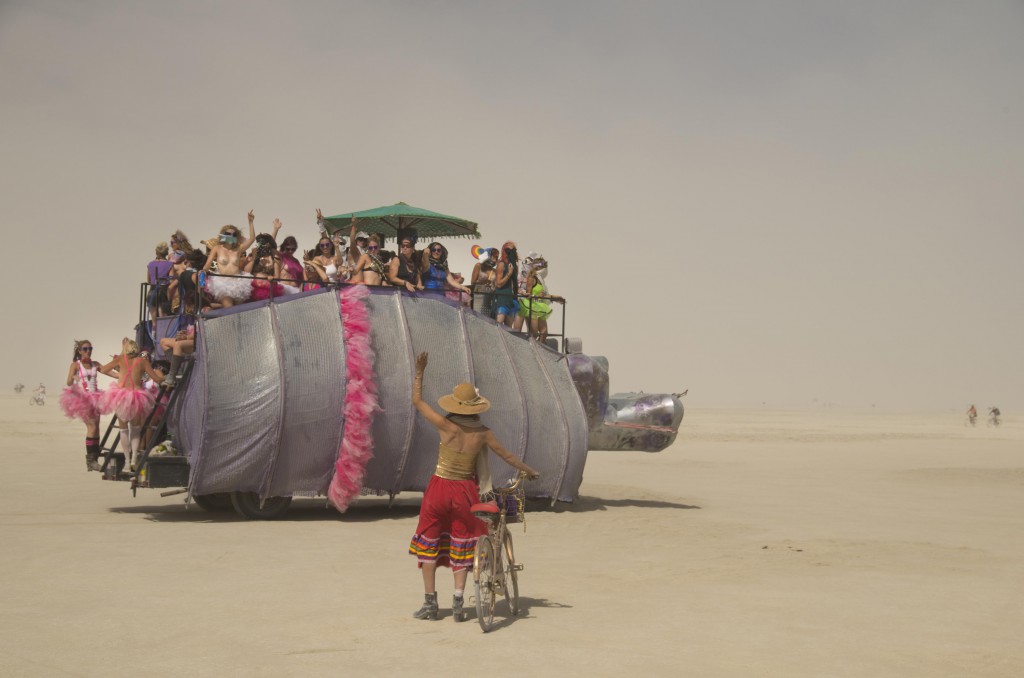 Adding to the spectacle are the elaborate art cars that are constantly cruising by day and night. Hundreds of thousands of dollars are spent building these contraptions. There are cars and trucks that look like giant octopuses, deep sea creatures, converted boats, floating islands, dragons, and airplanes, just to name a few. Often they serve another purpose, as they carry with them speaker systems worth more than what most people will ever pay for a home. Popular art cars and their DJs will often have a slipstream of people following them deep into the desert, where a dance floor erupts and continues until well after sunrise. 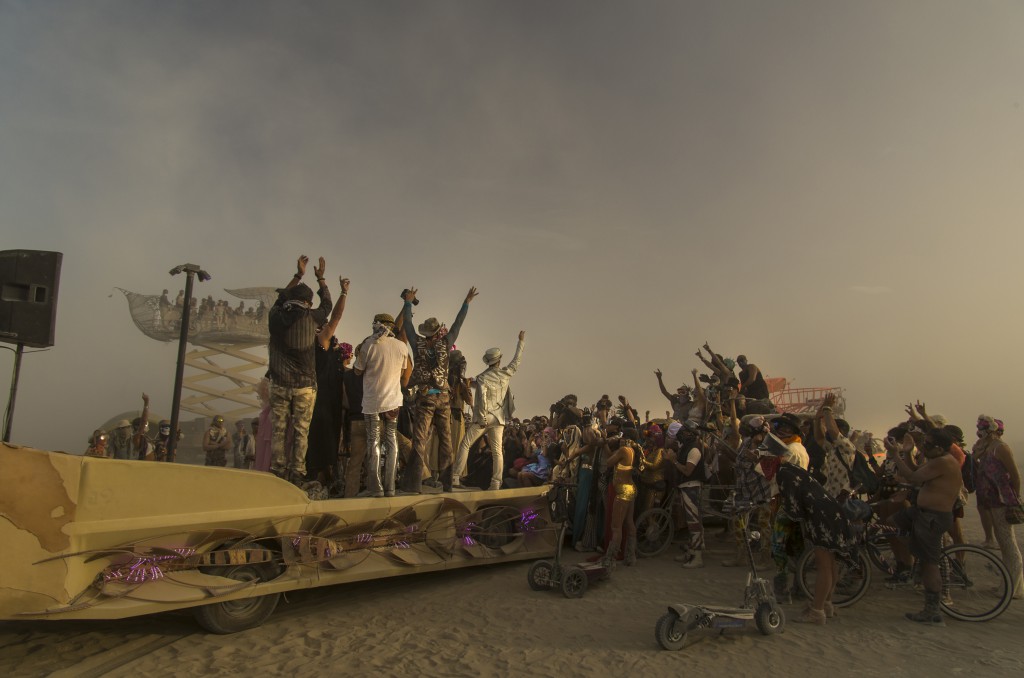 It might look and feel like Mad Max at times, but Burning Man is by no means a lawless society. Police and state rangers dish out speeding tickets, remain on the prowl for illegal substances 24/7, and even ensure that IDs are checked wherever alcohol is served. Yet make no mistake, the usual constraints and expectations of society have been completely loosened: this is a place where people of all walks of life can — for at least one week of the year — be exactly who they want to be. For instance, one day the dust departed long enough for me to spot a guy sporting a Santa Claus beard and a peach-coloured tutu. He stood in the one spot, mesmerised as he twirled a plastic human skull around his head, like John Wayne wielding a lasso.

“You look like you’ve finally found your home,” I remarked. “Exactly,” he said, noting it was his first Burn and he had only arrived the previous day. What makes someone want to dress up like Santa in a tutu and twirl a skull around his head for hours on end is personally beyond me, but such considerations completely miss the point. Burners frequently greet each other by saying “Welcome home,” because many inherently feel like the event is the only place where they can truly be themselves. The irony is that most have travelled thousands of kilometres away from their actual homes to a desolate dust bowl to finally find a place that accepts them whole. 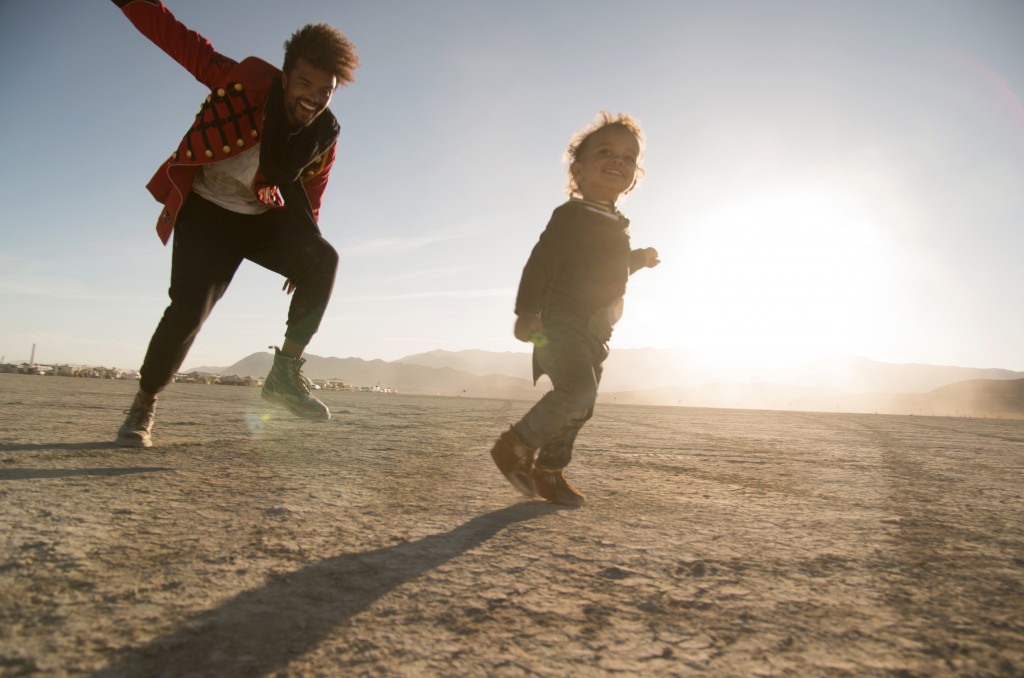 Perhaps, then, Burning Man represents something that we’re all ultimately yearning for: a place, community or family, who will give us the freedom to be our truest selves and embrace us for who we all ultimately are — human beings with an inherent desire to love, create and be joyous. At the Burn, no one ever seems to be completely on a metaphorical island because there are tens of thousands of other people just like them, exploring their own gamut of craziness, weirdness, or freakiness.

These are not just the drug-taking or hippy stereotypes that many would love to attribute to Burners. Rather, they’re just as likely to be lawyers, CEOs, geologists, models, and artists. Gender, sexual and racial diversity are strongly represented. Everyone and anyone can be a Burner because whatever that person identifies with — where they live, what they do, what they wear — eventually melts away on the Playa. Some people (like me) need a little push to unleash their wild side, while others seem to easily let go.

Either way, all walks of life from all over the world make this incredible pilgrimage because they feel drawn to exploring something deeper within themselves. By doing so, they expand beyond personal and societal limitations as to what humanity should look like or how it should behave. If it’s true that life isn’t about finding but rather creating ourselves, then Burning Man provides the ultimate blank canvas.

There’s More to Sonoma County Than Vineyards and Food