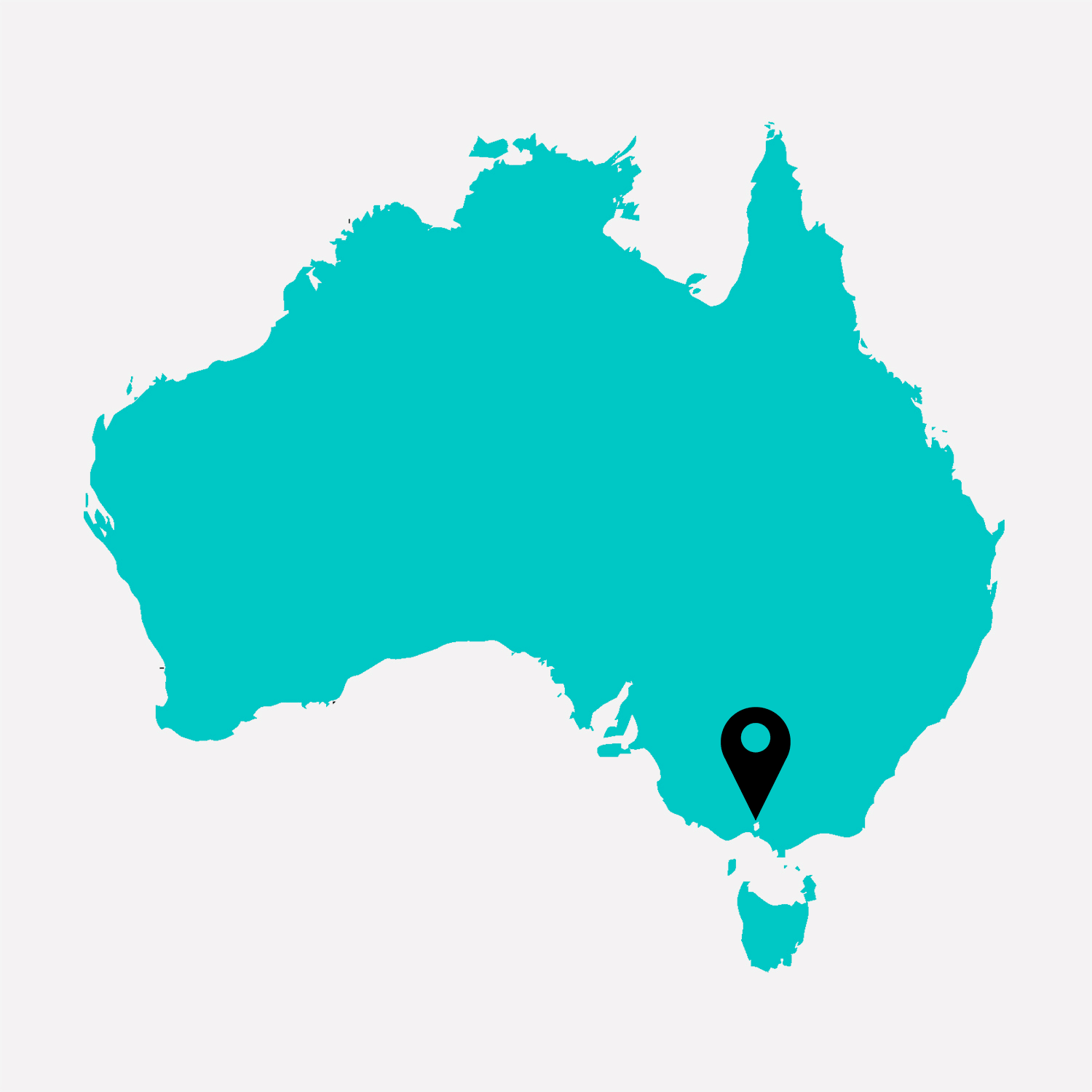 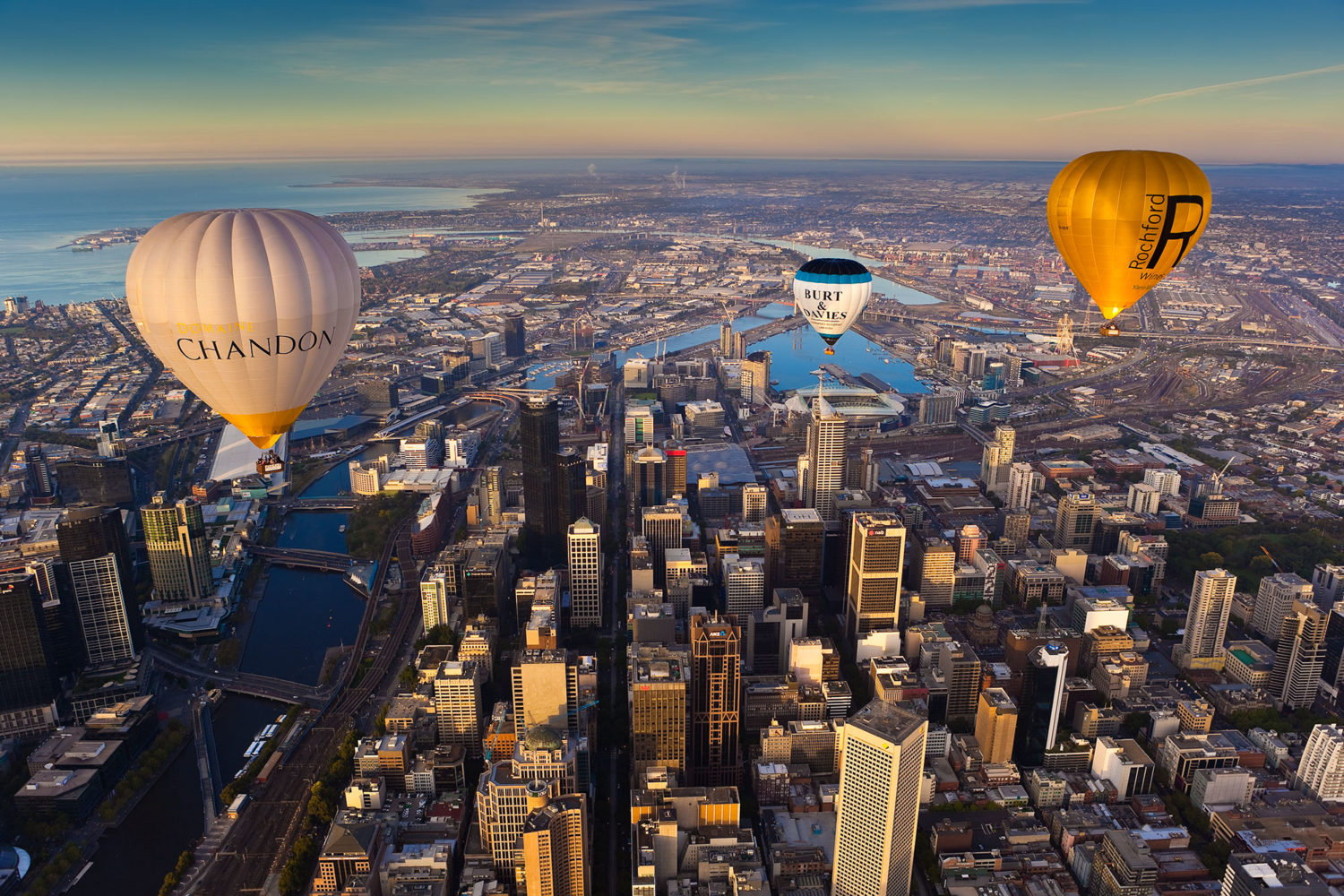 We open our eyes to a world painted by the soft brushstrokes of Claude Lorrain. The sky is a hazy blue, smeared with wisps of crimson from the rising sun reflecting against the glass-paned walls of skyscrapers. Hot air balloons navigate this jagged man-made terrain, manoeuvring gracefully between the glass peaks.

As we lie in bed taking in this ceremonious sunrise, the streets of Melbourne begin to stir beneath us, framed by the floor to ceiling windows of our hotel room. From 20 floors up, we can easily see the contours of the city, moulded by the dip of the surrounding valley and the twists and turns of the muddy waters of the Yarra River. It is this geography that long ago dictated the layout of Melbourne’s CBD.

Designed by surveyor Robert Hoddle in 1837, the streets form a rectangular grid. The predictably-named ‘Hoddle Grid’ is made up of principal and secondary streets measuring exactly 30 and 10 metres wide respectively, forming regular blocks 201×201 metres in dimension. This rigid spatial pattern has proved to be remarkably resilient over the years and continues to inform the basis of development in Melbourne today.

…getting to know Melbourne is a ‘pass the parcel’ game: each time the music stops, the city reveals yet another surprise.

As we explore the city, a recurring theme emerges: Melbourne possesses a multi-layered culture in which its rich colonial past, modern Australian influences, and the myriad of world cultures that now call the city home have integrated to form a unique local identity. With Victorian architecture to admire, a thriving arts and cultural scene, a calendar of major sporting events and international festivals, world-class restaurants that make foodies weak at the knees, and shopping that gives limbs and pockets a good workout, getting to know Melbourne is a ‘pass the parcel’ game: each time the music stops, the city reveals yet another surprise.

Walking around the city centre, we are grateful to Hoddle for his insistence on spacious thoroughfares. In a city of 4 million inhabitants that hosts thousands of visitors, these streets provide room to breathe in what could otherwise become a claustrophobic space. The broad pavements are lined with shady oak and plane trees, extensive sweeping verandahs, interactive ground floor shop fronts, and of course, the outdoor cafés  intrinsic to Melbourne’s coffee culture.

Roads that 175 years ago were frequented by horse-drawn transport and bullock carts are today able to simultaneously accommodate motor vehicles and the electric trams that have become an iconic feature of Melbourne’s transport system. These streetscapes are vibrant and sociable rather than mere pedestrian stomping grounds.

Sandwiched in between the principal streets are the secondary thoroughfares, identifiable by the ‘Little’ descriptor. Little Bourke Street, for example, is the petite sibling of parallel Bourke Street. Running between these is an intricate network of pedestrian-only cobbled pathways. It is down these laneways that we discover intriguing and eclectic aspects of Melbourne culture: we happen upon a mix of quirky and designer boutiques featuring local and international brands, exterior walls acting as impromptu galleries of stencil and graffiti art.

Above the streets, an astounding collection of hidden rooftop bars keeps a Melbourne afternoon or evening interesting: Rooftop Bar houses an open air cinema, Campari House features turf lined floors, while the Carlton Hotel opts for tropical palm trees and Siglo offers some of the most striking views of the Melbourne skyline.

If that wasn’t enough, the variety of gastronomic sensations and world cuisine on offer in the city means that Melburnians have some of the most well-travelled stomachs around. Industry and local favourites like Attica and Vue de Monde are compulsory, and we indulge in a long lunch of Spanish tapas and vino at MoVida while trying not to salivate too openly.

More casual establishments also offer unique experiences. We spend a lazy afternoon at Riverland Bar along the Yarra, enjoying a beer and tapas while watching birds swoop to gather their own mid-afternoon snack from the river. We savour well-brewed morning tea and coffee along with dainty macaroons at a street café, observing a colourful mix of Melburnians go about their daily lives.

To truly experience the richness of the city’s multi-cultural culinary scene, we cannot overlook the concentration of international eating establishments. Little Bourke Street’s China Town was established when the first Chinese settlers landed on Melbourne’s shores during the gold rush of the 1850s, while Lygon Street was populated by Italian immigrants searching for employment and a better life after the Second World War.

Many of these immigrants naturally gravitated to others from their own community and sought to recreate the traditions and lifestyles of the homes they had left behind. Over the years, they integrated into their new country, but the flavours they brought with them have helped develop Melbourne’s passion for multi-cultural cuisine.

Another shared passion of Melburnian culture is a fervour for sports, in particular Australian Rules football. Not going to a game while in town is like not seeing the Eiffel Tower while in Paris. Attending an Aussie Rules game at the Melbourne Cricket Ground (MCG) is almost a religious experience, never more so than during the annual Anzac Day game between two of Australia’s footy giants, Collingwood and Essendon.

Standing silently, shoulder-to-shoulder with 100,000 people, while the farewell song of a lone military bugle player resonates around the circular, skyward-reaching rows of the stadium-turned-auditorium, the green oval below us etched with the words ‘Lest We Forget’, is a memory that will stay forever imprinted on our hearts.

As the song ends, the crowd once again erupts into a furore in anticipation of the upcoming clash. Regardless of whether or not one is familiar with Aussie Rules, let alone barracking for a team, it is impossible to not get caught up in the electric atmosphere, energised crowds, meat pies, Carlton Draft beer, and the fast-moving, high scoring game.

When the final whistle blows and we find ourselves jumping in the air in celebration and swaying arm-in-arm with our neighbours to the winning team’s anthem, we know for sure that we have not missed out on one bit of Melbourne’s charm.